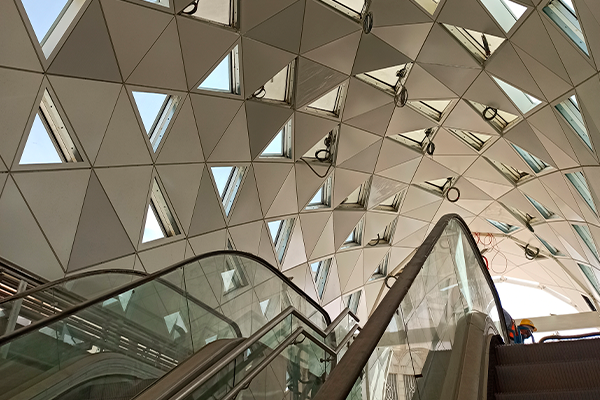 The net attributable profit achieved in the first nine months of the year was 384.9 million euros, which represents an increase of 120.6% compared to that obtained in the previous year.

In the first nine months of the year, the FCC Group's turnover reached 4,864.1 million euros, which is 9.4% higher than the same period in 2020. This behavior is attributed to the good performance in the different activities and services that the Group offers.

The positive evolution of the results is also reflected in the notable advance of the gross operating profit (Ebitda), which improved by 7% at the end of the third quarter and amounted to 814.7 million euros, mainly driven by the Environment businesses and Construction, with an increase of 20.7% and 73.8%, respectively.

It is worth mentioning the evolution of the Group's financial debt, which, at the end of the quarter, stood at 2,417 million euros, which represents a reduction of 13.6%, compared to the same period in 2020.

At the end of September 2021, the net worth reached 3,361.3 million euros, 15.6% higher than the record in the same period of 2020, thanks to the substantial increase achieved by the net result.

FCC Inmobiliaria strengthens its size and competitive position
On October 8, the real estate head of the Group, FCC Inmobiliaria, reached an agreement with Control Empresarial de Capitales, (CEC) to acquire 13.11% of Realia's share capital for an amount of 83.9 million euros, which gives it a position of control and its global consolidation in the FCC Group. In addition, it incorporates 100% of the capital of Jezzine, an equity rental company owned 100% by Soinmob (a subsidiary of CEC). As a result of this operation, control of FCC Inmobiliaria is maintained, with 80.03% of the capital of the subsidiary, with the remaining 19.97% in Soinmob.

With these two operations, the rental equity of FCC Inmobiliaria grows substantially, as a large part of the assets are incorporated. This operation allows the creation of a solid and large real estate head, which allows diversifying its risk and geographical opportunities, by expanding its activity to new areas of operations in which it is not currently present.

FCC Environment has a wide presence in Central Europe and the United States of America
FCC Environment Austria has been awarded the municipal waste treatment and transport contract of the West Tyrol Waste Treatment Association, which will start in January 2022, with a term of 5 years extendable for another 5 years and with a portfolio of 33 million of euros.

In the US, the City of Wellington (Florida) awarded FCC Environmental Services the municipal solid waste collection service for 10 years (with a possible extension of another five), which represents a portfolio of more than 110 million euros. Continuing with this trend, in June it won the largest of the lots of the Hillsborough County residential and commercial solid waste collection contract, also in Florida, for eight years (with a possible extension of four) with a portfolio of 230 million euros .

Thus, the total portfolio in this growing market exceeds 1,000 million euros, with more than 8 million population served which, after 5 years of organic growth, makes it one of the 20 largest operators in the country.

Aqualia improves its credit rating to Investment Grade
In June, Aqualia received recognition for the stability and strength shown by its water cycle management business, with the upward revision of its credit rating to investment grade by the Fitch Ratings agency. This supports the high operational quality and solid financial profile of the main areas of the FCC Group.

FCC Environment reinforces its waste collection and treatment activity in Spain
Last August, FCC Medio Ambiente was awarded several lots of the street cleaning contract for the city of Madrid for a combined amount of more than 400 million euros (still pending incorporation into the portfolio) and a duration of 6 years, extendable two others.

The Valladolid City Council has chosen the UTE led by FCC Medio Ambiente for the contract for the design, development and operation of the Waste Treatment and Elimination Center The domestic services of the regional capital, which serves more than half a million inhabitants. The contract portfolio amounts to more than 110 million euros over 11 years and it is scheduled to come into operation at the end of next year. In the same way, and in the recovery activity, the new contract for the selective collection and temporary storage of glass container waste for ECOVIDRIO in various Autonomous Communities also stands out, through FCC Ámbito. The contract involves a portfolio of 13.5 million euros, with a duration of eight years from February 2022. It has been present in this field of recycling for more than 25 years, reaffirming the commitment to build more sustainable societies and consolidating environmental values.

FCC Construcción wins the European PPP “Deal of the Year” award for the A465 project in Wales and strengthens its portfolio in Chile
The extension of the A465 motorway in the United Kingdom received the European Award for Project of the Year. The PFI organization appreciated the magnitude and importance of the project to be developed as it contributes to the improvement of mobility and connectivity in Wales, as well as to the reactivation of the local economy.

The project awarded in Chile consists of the construction of the industrial bridge in the city of Concepción, with a budget of more than 125 million euros and an execution period of 32 months.

FCC Construcción is “preferred bidder” in the Rv.555 Sotra Connection project (Norway)
The project has a value of 1.7 billion euros, which includes the design, construction, financing, operation and maintenance for 25 years, of a network of roads, tunnels, bridges and viaducts in the county of Vestland, in western Norway . The financial closing is scheduled for 2022.

Sotra Link will run nine kilometers of a four-lane highway from Storavatnet (Bergen) to Kolltveut (Øygarden). In addition, it will build a suspension bridge between the island of Sotra and Bergen, which will be 900 meters long and 30 meters wide and will have a main span of 600 meters and towers 144 meters high. The project also includes the construction of 12.5 kilometers of tunnels, three smaller bridges and 14 kilometers of lanes for pedestrians and bicycles. A new car park will be built at the Straume and Storavatnet transport terminals.