•    More than a thousand CEOs sign the Declaration in favor of renewed global cooperation and commit to join in the business of a better world
•    17% of the signatory companies are Spanish, placing Spain as the first country in terms of CEOs adhering to the declaration. 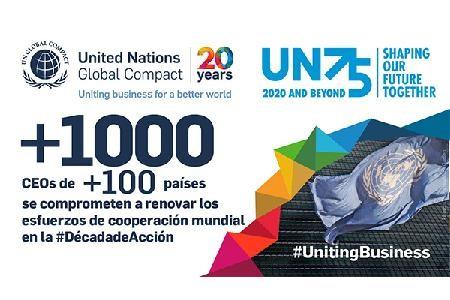 FCC Construcción has joined the commitment to support multilateralism in the framework of the 75th anniversary of the UN. More than 1,000 CEOs of companies from more than 100 countries have demonstrated their support for the United Nations and inclusive multilateralism by signing an ambitious Declaration in favor of renewed global cooperation.

The Declaration includes the signatures of some of the most important companies in the world along with hundreds of companies of all sizes and sectors that are adhered to the United Nations Global Compact, the largest corporate sustainability initiative in the world. At the national level, 183 of the signatory companies, 17% of the total, are Spanish, placing Spain as the first country in CEOs adhering to the declaration.

"The Declaration is a resounding act of support for inclusive multilateralism. In unequivocal terms, it establishes that cooperation must cross borders, sectors and generations so that we can adapt to changing circumstances," said Sanda Ojiambo. "In just one month since we launched the Declaration, we have managed to gather more than 1,000 signatures of CEOs from companies of all sizes and virtually every industry and region. We deeply appreciate your commitment to global cooperation at a crucial time. for the United Nations and for the world in general. "

The 75th anniversary of the United Nations is celebrated at a time of unprecedented global disruption and transformation, a stark reminder that international cooperation must mobilize across borders, sectors and generations to adapt to circumstances. changing.

In the spirit of renewed global cooperation, public and private institutions must demonstrate that they are responsible, ethical, inclusive and transparent.

The CEO-endorsed statement states that: "We entrepreneurs recognize that peace, justice, and strong institutions are beneficial to the long-term viability of our organizations and are critical to upholding the Ten Principles of the Global Compact on the United Nations and achieve the Sustainable Development Goals (SDGs) Now is our opportunity to learn from our collective experiences to realign ourselves in accordance with the mission of the United Nations and lead our world towards a more equitable, inclusive and sustainable path. together in this and we are united in the business of a better world".

The Private Sector Forum is the first in a series of three events organized from September 21-23 by the United Nations Global Compact under the title Uniting Business LIVE. These are held within the framework of the 75th session of the United Nations General Assembly with the aim of promoting the Business Principles and the Sustainable Development Goals.

The Declaration also supports the goals of SDG 16: peace, justice and strong institutions. Aspects that are key for the future of business according to a study carried out between June and July through the Platform for Action of the United Nations Global Compact on SDG 16, which includes interviews with 60 high-level executives and whose conclusions reveal that, along with environmental and social issues, business leaders believe that good governance is at the core of good business.

About the Spanish Global Compact Network

The United Nations Global Compact operates in Spain through the Spanish Network, which currently has 1,603 entities adhered to this initiative of corporate social responsibility, of which 22% are large companies, 61% are SMEs and 17% They are other types of entities (third sector, business associations and educational institutions). Its objective is to promote the implementation of the Ten Principles of the Global Compact among the signatory entities for business sustainability and work on the SDGs with companies and the private sector.