FCC Construcción celebrates the 30th anniversary of the completion of the Santa Justa station (Seville), the first high-speed station built in Spain

FCC Construcción celebrates the 30th anniversary of the completion of the Santa Justa station (Seville), the first high-speed station built in Spain 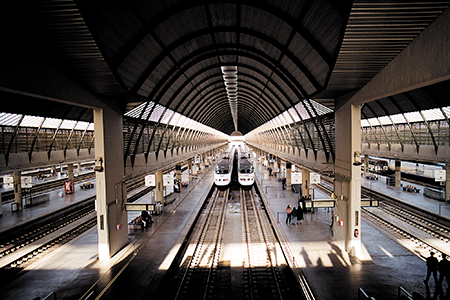 FCC Construcción celebrates the 30th anniversary of the completion of the Santa Justa station (Seville), the first high-speed station built in Spain.

More than 208 million people have passed through the station. Sevilla Santa Justa entered service at dawn on May 2, 1991, unifying in a single railway terminal all the circulations with origin / destination Seville, previously divided between the old stations of Plaza de Armas and San Bernardo.

During these 30 years, Seville Santa Justa, thanks to the high speed rail, has become the gateway to the city of Seville, and a key infrastructure to experience unique events, such as the 1992 Universal Exposition and the Spanish Championship. Athletics World of 1999, among others, or sporting, recreational and cultural events that are repeated every year with the arrival of thousands of people thanks to sporting and cultural events, Holy Week and the April Fair.

On the other hand, Sevilla Santa Justa, due to the modernity of its facilities, became from the beginning a test site for the constant improvement of services to customers, highlighting the pioneering improvements in accessibility.

Along with elevators, fixed and mechanical stairs, as accessibility facilitators, the Sevillian station introduced for the first time in Spain the use of mechanical ramps, as a means of comfortable and safe access from the lobby to the platforms and vice versa. In addition to a non-slip floor installed in the hall, side corridors and walkway.

These initiatives promoted the design of a new station model, in which total accessibility was prioritized, eliminating architectural barriers that impeded access to the lobby from the street or its communication with platforms and shopping areas, thus facilitating transit of people with disabilities and the circulation with luggage trolleys.

Proof of these improvements are the prizes and awards that Santa Justa obtained as soon as it opened its facilities:

The station, located in the old Prado de Santa Justa, to which it owes its name, next to the avenue of Kansas City, was born equipped with twelve tracks: six of national gauge (routes 7 to 12) and six of UIC gauge, destined to high speed circulations (routes 1 to 6). The latter came into service with the start-up of the Madrid-Seville High Speed Line in April 1992, also coinciding with the opening of the Universal Exhibition in Seville.

Its total area and annexed areas is 80,000 m² distributed through the access plaza, the head of the station and the patio of platforms.

Sevilla Santa Justa was designed by the architects Antonio Cruz and Antonio Ortiz who used characteristic elements of Seville architecture such as exposed brick, arches or the great height of its ceilings, with a central axis identified with its large open-plan hall. of an approximate surface of 3,000 m².

The premises and commercial services of the new station were gradually put into operation over the following months and until 1992, concluding the process with the incorporation of the Madrid-Seville High Speed Line on April 21, 1992.