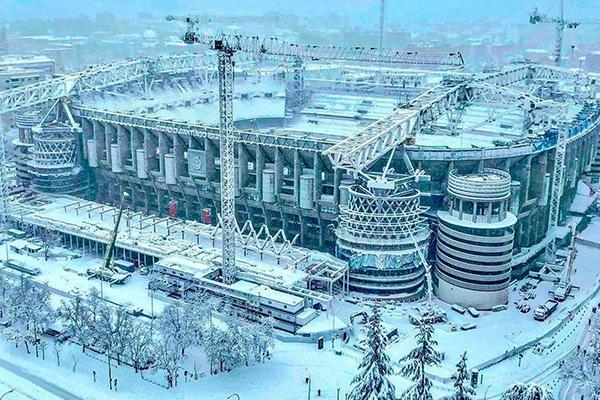 FCC Construcción continues to advance in the transformation project of the Santiago Bernabéu stadium. The Santiago Bernabéu of the 21st century will be a great avant-garde and universal icon and, since June 2019, it is undergoing a spectacular transformation. Some work that reflects these changes has taken place on the roof. First, the old one was dismantled and the construction of the new one began, which will protect all the towns with its fixed structure, while the retractable one will extend over the playing field. One of the most significant actions for this part of the stadium was the raising of the voussoirs and the subsequent closing of the north and south trusses, between Castellana and Padre Damián.

An element of the future stadium that can also be appreciated is the metallic structure of the new towers on Paseo de la Castellana. Equipped with ramps, escalators and elevators, they will replace the current towers B and C and will serve to make the traffic of spectators more fluid. They will also have an architectural function, since they will be a structural support for the new roof.

The other two supports for the roof are on Padre Damián street. To do this, the towers on this side were demolished and the foundation work began, which was completed with a metal structure.

On this side, there are also two major changes since June 2019. The first is the works of the underground car park in the place occupied by the La Esquina del Bernabéu shopping center. The construction of the five basement floors has been deepened to the new level below ground, instead of the three that the previous shopping center had. Approximately 500 parking spaces will be generated and will allow new uses such as parking for Real Madrid buses and the opposing team.

The second change is the demolition of the annex building, which housed the club's institutional offices and the Adidas store. This work will allow the construction of a new building that will rise along the entire side and that will have ten functional levels above ground (in the previous one there were three) and three underground. It will be an integrated building within the new volume of the stadium.

These actions have been carried out with precision and with the maximum safety conditions thanks to the installation in the surroundings of the Bernabéu of the work aids. These include six fixed cranes with a reach of 90 meters. The construction camp has also been expanded through the assembly of new canteen and changing rooms for workers, in order to rigorously comply with COVID-19 prevention measures.

All these novelties are intended to turn the Santiago Bernabéu into an avant-garde stadium, with maximum comfort, safety and state-of-the-art technology, and where fans continue to live unforgettable experiences.