Inauguration of the Coatzacoalcos tunnel (Mexico), built by FCC

Inauguration of the Coatzacoalcos tunnel (Mexico), built by FCC

The Governor of the State of Veracruz, Miguel Ángel Yunes Linares, accompanied by federal, state and municipal authorities and representatives of Ideal, yesterday inaugurated the Coatzacoalcos underwater tunnel running under the River Coatzacoalcos to connect Coatzacoalcos and Villa Allende. FCC was represented by Enrique Díaz, Mexico Country Manager, and the FCC Construcción project team as well as Fausto González, Director of the Coatzacoalcos tunnel concessionair 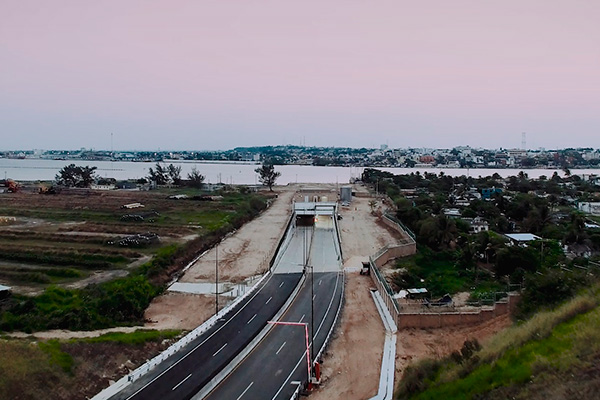 This is the first underwater tunnel in Latin America and will facilitate land transport in the south of the State of Veracruz, Tabasco and part of Chiapas, improving the rhythm of life of more than 330,000 inhabitants.

The tunnel is 1,140 metres long and 28 metres wide with the underwater section some 690 metres long at a depth of 12 metres at the start, reaching approximately 15 15 metres deep in the middle.

From now on, users will be able to cross the city in just three minutes, a considerable saving of time, since the same journey previously took 30 minutes on a road used by more than 20,000 vehicles.

It is 35 metres below the average water level and crosses under the port’s two navigation channels, Api and Pajaritos. Inside the tunnel, vehicles can travel at 50 and 60 kilometres per hour.

The tunnel is backed with technology that meets the highest safety standards, such as the fire detection system for responding immediately to any type of incident.