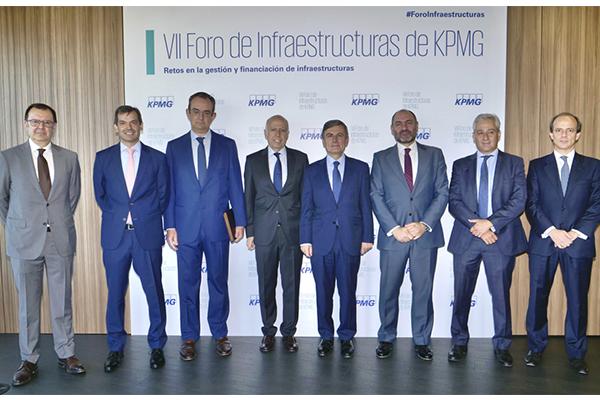 FCC has participated in the VII Infrastructure Forum organized by KPMG. During the day, trends such as public-private collaboration as a financing instrument, payment for use or the use of new technologies in infrastructure management were analyzed. This has been one of the main axes of the VII Infrastructure Forum of KPMG that has brought together some of the main players in the sector to discuss the management and financing of assets.

In his opening, Hilario Albarracín, president of KPMG in Spain, highlighted the "world leadership of the Spanish multinationals of the sector" in a moment of "deep transformation as a consequence of the technological disruption and the digital revolution".

For his part, Pedro Saura, the Secretary of State for Infrastructure, Transport and Housing said in his speech to the need to continue with the investment rhythm to persevere in the objectives of economic growth. Similarly, detailed the Government's commitment to a new infrastructure policy whose objectives are stability and predictability in order to "soften the economic cycle and give certainty to avoid adjustments in times of crisis."

In this regard, he assured that public-private collaboration "is a very necessary instrument that can provide stability and certainty in a framework of high public debt and high contingent liabilities". However, he stressed that both administrations and companies have to dialogue and work together to find the ideal model where both the taxpayer and the investor and private initiative win. "The objectives of a private public policy should be to align the incentives with the benefits and risks for the public and private sector; in addition to making the model more resistant to adverse demand shocks and risks to come in the future, "he said.

During his speech, Saura had time to list some of the immediate actions of the new Government. Among them, the commissioning of 1,000 new kilometers of high-speed lines or the investment of 10,000 million euros in the Cercanías network for the next 10 years stand out. Similarly, confirmed that the Government will continue with the Extraordinary Road Plan, which provides for the investment of 5,000 million euros to build and improve 2,000 kilometers of roads and announced the relicitation of toll roads in 2019.

In the subsequent round table moderated by Ovidio Turrado, partner responsible for the Infrastructure sector of KPMG in Spain, managers from some of the main companies in the sector participated, such as Pablo Colio, CEO of Grupo FCC; Luis Castilla, CEO of Acciona Infraestructuras; Santiago García Salvador, director of Europa Dragados - Grupo ACS; and Manuel Beldarrain, Managing Director of Macquarie Capital.

The main reflections of the round table revolved around the need to increase investment in infrastructures, for which it would be key to implement long-term public-private collaboration mechanisms and models. These collaboration models should have a balanced and clear risk scheme, which would encourage the participation of builders, investors and financiers. During the session, the convenience in deepening in financing models in which the final beneficiaries are those who bear the cost of the infrastructure, as in other countries around us, was also stressed.