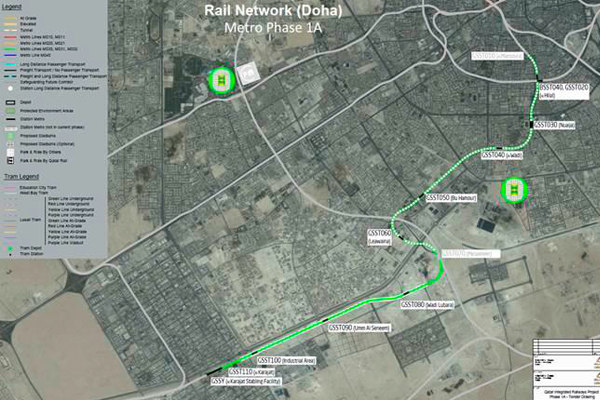 The International Consortium of which FCC Construction has been prequalified for the construction of "Green Line Extension" Doha Metro.

The surface section is part of the Green Line M30-32 and begins the transition surface and end surface Mesaimeer to station Al Karajat. This lot includes 1.92 km of double track and 5.20 km of viaduct, in addition to 3 elevated stations and 1 surface station with pedestrian bridge access.

In both batches it included the design and implementation of rail systems to be fully automatic and compatible with existing systems designed Phase 1 of the Doha Metro and capable of being expanded in later phases.

The section executed by FCC within the Red Line, is one of the most advanced in respect of all tranches various international construction companies are running. The viaduct is completely finished, and the stations are in the final phase of architectural finishing and testing of electromechanical equipment.

You can get more information about the Metro Doha project in: https://www.youtube.com/watch?v=gtaDy7NF6U8