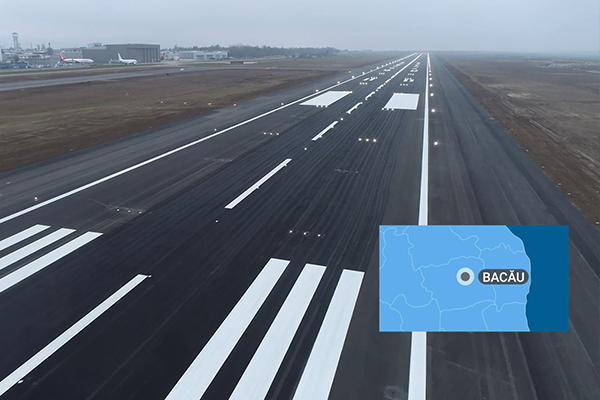 FCC Construcción has completed the construction project for the take-off and landing runway of one of the reference airports in Romania.

Its scope included the demolition of the existing runway, which has a length of 2,500 meters and a width of 45 meters, as well as the restoration of a new runway. The new take-off runway has at its end a platform for the return maneuver of the aircraft. The total landing area, including the return platform, is more than 115,000 square meters. The project also included the rehabilitation of the traffic lanes, the expansion of the embarkation and disembarkation platform as well as the construction of the airport's perimeter security road, the installation of beacons on the new runway and the security platform.

FCC Construcción has a strong presence in Romania. It is currently developing crucial railway projects to improve the mobility of the country. The new projects, financed by funds from the European Commission, are part of the project for the rehabilitation and modernization of the railway in the IV Pan-European Transport Corridor that crosses Romania. The sections comprise section 2: Km 614-Gurasada, made up of sub-section 2a: Km 614-Cap Y Bârzava and sub-section 2b: Cap Y Bârzava-Cap Y Ilteu, as well as section 3: Gurasada- Simeria .

The set of three works consists of the execution and modernization of 121.62 kilometers of railway; 47 bridges; eight upper and seven lower steps; a 659 meter long tunnel; 19 stations and five stops, as well as electrification works and the implementation of the ERTMS system (European Rail Traffic Management System).

You can see the constructive video here.