The Almonte viaduct project (Cáceres), carried out by FCC Construcción, has been awarded a runner-up award in the III Edition of the ACHE Engineering Awards organised by the Scientific and Technical Association for Structural Concrete (ACHE). 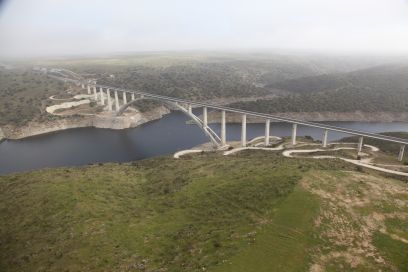 These engineering awards aim to honour projects which, due to their quality, importance and innovation, contribute to the progress of structural concrete and structures in general.

The awards ceremony will take place during the closing dinner of the 7th ACHE Congress, which will be held in La Coruña between 20 and 22 June 2017.

The viaduct over the Almonte river is located between the municipalities of Alcántara and Garrovillas in the province of Cáceres. It measures 996 metres long and has a 384-metre central concrete arch-type span, making it a world record breaker in terms of high speed railway arch bridges. If the world ranking of concrete arches, for both railway and road use, were taken into consideration, it would be among the largest in the world.

In Spain, the viaduct symbolises a significant leap, beating the span length of the Contreras Viaduct, which has a 261-metre arch and previously held the Spanish record for concrete railway arch bridges, and the River Tajo Viaduct, currently under construction with a 324-metre span. It entails a huge technical challenge that secures Spain's place at the forefront of international high velocity and engineering projects.

The viaduct is located on the Madrid-Extremadura High Speed Line. As the Almonte river runs off into the Alcántara reservoir, the riverbed itself significantly widens. As such, a viaduct with a special span is required to enable the line to cross it. The Administrator of Railway Infrastructure (ADIF) is the owner of the line that was designed by IDOM and Arenas y Asociados, the latter also being the viaduct designers. The construction has been carried out under a joint venture project comprising FCC Construcción and, with a lower percentage, the Portuguese company, Conduril. The design detail of the viaduct and the construction engineering have been undertaken by the Technical Services of FCC Construcción.