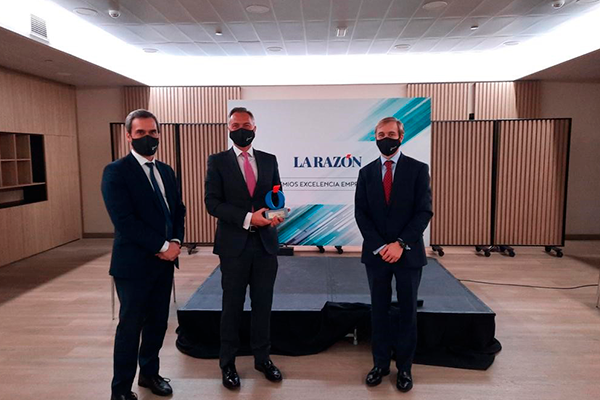 Tranvía de Murcia has been awarded in the category “Leadership in Sustainable Mobility” within the awards for Business Excellence organized annually by the newspaper “La Razón”.

The event was attended by different national, regional and municipal political personalities, as well as a representation from the private sector. On the part of the Tranvía de Murcia, the Manager, Severiano Arias, received the award and was attended by two of the members of the Tranvía de Murcia Board of Directors, Ignacio Codesal and Jose Luis Gascón.

These awards recognize the trajectory of companies in different sections, being Murcia Tranvía awarded in 2021 for its contribution to sustainable mobility in the municipality of Murcia.

"For the Murcia Tram, this award is the recognition of the tram's commitment to the city of Murcia, its sustainable mobility and the structuring of urban connectivity in the city and its districts," explains Severiano Arias.

Since the start of commercial operation of the Murcia Tram, in May 2011, the tram has avoided the emission into the atmosphere of more than 35,000 tons of CO2, thus contributing to the improvement of the municipality's air quality , and promoting more sustainable and efficient mobility.

Tranvía de Murcia is also the holder of the Reduzco Seal, awarded by the Ministry for the Ecological Transition. The Reduzco seal allows organizations to demonstrate their participation in the Carbon Footprint Registry and also reflects the degree of effort undertaken by them in the fight against climate change.

All the energy consumed by Tranvía de Murcia is 100% green or renewable energy and, in addition, it has put into operation a photovoltaic installation on the roof of the workshop and garage building that provides energy to the building, and that avoids the emission of more than 74 tons of CO2 per year.

In the latest satisfaction survey, carried out last November among Murcia Tram users, more than 43% of those surveyed consider the extension of the line as the main way to improve the service offered. Of these, more than 23% point to the preferred destination of reaching the El Carmen station.