The Minister for Development, Iñigo De La Serna, the Chair of Adif, Juan Bravo and the General Director of Adif, Isabel Pardo de Vera, visited the Vandellós – Tarragona section of the project for the connection of the Mediterranean Corridor with the Madrid – Barcelona – French frontier high speed line on 2 June. The works are being delivered by FCC. 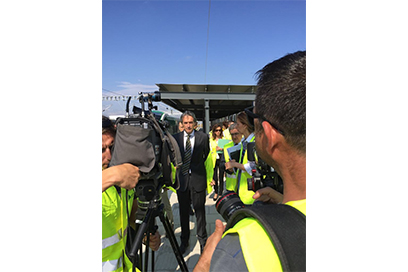 With a budget of €110 million, the project consists of installing the track superstructure for the entire section of the railway corridor connecting the Mediterranean Corridor with the Madrid – Barcelona – French frontier high speed line and all the infrastructure actions necessary for its proper implementation.

Feature of the section

The new alignment, which is 65.2 km long and designed for high speed and mixed traffic, will connect the Mediterranean Corridor from Vandellós with the Madrid – Barcelona – French frontier high speed line and with the Tarragona – Reus conventional gauge line.

The main infrastructure works include the Los Rojales tunnel, 1.91 km long, and viaducts totalling over 9.1 km, notably those of Cambrils, 746 m, and of Francolí, 3.485 km. They also include the new L’Hospitalet-Mont-roig and Cambrils-Salou stations and the siding at Rifá for trains up to 750 m.

The maximum speed on the line will be 200 km/h in both the Iberian and standard gauge areas.

The new railway line has approximately 35.3 km of double Iberian gauge track between Vandellós and La Boella, where there will be two gauge changers for the connection with the double standard gauge Madrid – Barcelona – French frontier high speed line. The double track standard gauge section from the changers in La Boella to the Camp de Tarragona station is approximately 11.5 km long.

Currently, work on the platform and the two gauge changers is finished and work is under way for track laying, catenary and safety and communications installations as well as the civil engineering work for the emergency exit in the Los Rojales tunnel.